Annual Inflation Rises 2% in the Euro Area for June 2018

According to Eurostat, the inflation rate in the Euro Area was 2.0% at the conclusion of June 2018, increasing 1.9% from the May 2018 rate. Simultaneously, European Union annual inflation stayed steady at 2% in June 2018 compared to May 2018. 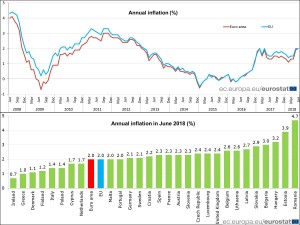