Caribbean Flavours and Fragrances (CFF), revenues increased to $462.46 million for the twelve months ended December 31, 2019. Cost of sales amounted to $323.30 million. Management noted, “the company faced significant increase in logistics costs and increases from suppliers this resulted in substantial increases in cost of sales.” Consequently, gross profit amounted to  $139.16 million for the year end.

The Company recorded a year over year increase in total expenses to $117.24 million. Total expenses comprised of selling and distribution which totalled $3.40 million, whereas, administrative expenses for the period closed at $113.84 million.

Consequently, profit from operations for the period closed at $21.92 million.

Consequently, after incurring taxation of $5.31 million (2018: $19.29 million), net profit for the period amounted to $31.50 million. Management noted, “outcomes from our strategy implementation and investment in the sugar reduction product portfolio was co-dependent on the introduction of a concurrent regulatory framework and enforcement regime. While the buy-in came from the number of local and regional players in the market, the regulatory framework and enforcement mechanisms to be instituted by the Government were delayed, which negatively impacted the returns we had projected from the market.”

CFF also stated, “we are committed to constantly seeking new ways to become more innovative and efficient and to diversify our product offerings and our markets. We ae building on the small successes in the export markets and will continue to expand this area of business.” 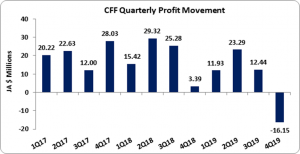