Cost of sales also increased for the period to $255.72 million. This compares to the prior year’s figure of $242.69 million, representing an increase of 5%. Gross profit increased slightly to $167.97 million for the period in review and compares to the prior year’s amount of $167.94 million. CFF highlighted that, “The company expects that there will be improvements in the upcoming quarters, as our sugar replacement substitute ‘Flavour Fit’ is gaining traction with the larger manufacturers and we anticipate to start seeing returns in the next reporting period.”

The company also noted that, “We will continue with the implementation of strategies geared towards managing our costs with a view to improving our efficiency and our profitability.”

The company had a marginal year over year decrease in total expenses to $92.48 million down from $95.01 million in 2017. There was a 20% decrease in selling & distribution expenses to $5.09 million (2017: $6.33 million). Whereas, Administrative Expense for the period slightly decreased to $87.39 million versus the prior year’s corresponding total of $88.69 million.

As a result, net profit for the period amounted to $87.21 million representing a 5% increase from the comparable period’s figure of $82.88 million, while for the quarter, net profit also increased by 5% from $28.03 million to $29.32 million. 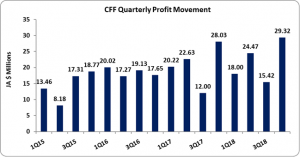