For the twelve months ended December 31, 2017, Cable & Wireless Jamaica Limited (CWJ) reported revenue for the period was booked at $27.17 billion, a 9% increase relative to the $25.04 billion last year. CWJ noted that this increase was “primarily driven by the Mobile revenue growth of 18% (on a rebased basis) largely due to a 1% increase in Mobile subscribers”.

Operating costs before depreciation and amortization increased by 2% to $17.94 billion. The company stated that the increase was “largely due to a 5% net increase in employees, administration, marketing and selling expenses; partially offset by a 3% decrease in outpayments and direct costs, primarily as a result of a decrease in interconnect costs associated, in part, with a decrease in international fixed line activity.”

Depreciation closed the period at $2.92 billion while Amortization was $1.18 billion.

Consequently, Operating Profit before exceptional items amounted to $5.13 billion. Operating Exceptional items was booked as an expense to total $112 million. Total operating profit after exceptional items amounted to $5.02 billion, an increase of 8% year over year.  “This was due to the net effect of (i) the impact of reversal of an impairment charge of $3,404m during the quarter ended March 2016, due to a change in strategy related to the utilization of certain assets that were originally impaired, (ii) accelerated depreciation due to the reversal of the impairment charge, (iii) the increase in revenue and (iv) the increase in operating costs.”

Finance income closed at $56 million while financial expense ended the year at a negative $5.22 million. 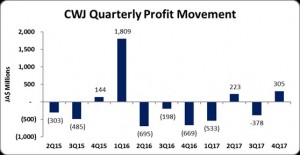