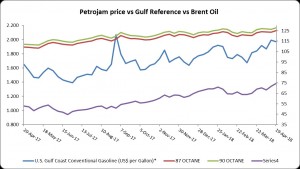 Canadian Crude oil production rose to 3.9 million barrels per day (b/d) in 2017, up by approximately 300,000 b/d from 2016. However, crude oil pipeline capacity out of Canada has not been able to keep pace with growing production. Many pipeline projects some to the U.S. and others throughout Canada to the Atlantic and Pacific Coasts for export, are either cancelled or delayed. In addition, the 590,000 b/d Keystone pipeline is currently limited to 80% of capacity since a leak in November.