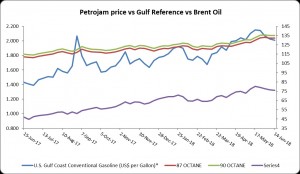 “The U.S. EIA expects Brent crude oil to average at $71 per barrel (b) in 2018 and will decline to $68/b for the upcoming year as noted in the June 2018 of its Short-Term Energy Outlook (STEO). The updated forecast price is more than the May STEO by $2. This rise shows global oil market balances that EIA foresees to be closer than prior forecast due to reduced expected growth in production from the Organization of the Petroleum Exporting Countries (OPEC) and the United States. Brent crude oil averages $77/b in May, a climb of $5 from April and the highest monthly average price since November 2014. EIA predicts West Texas Intermediate (WTI) crude oil prices will average almost $7/b less than Brent prices in 2018 and $6/b lower than Brent prices in 2019.”

“OPEC, Russia, and other non-OPEC countries are expected to meet on June 22, 2018, to assess present oil market conditions associated with their existing crude oil production reductions. Current reductions are scheduled to persists until the end of 2018. Oil ministers from Saudi Arabia and Russia have announced that they will re-evaluate the production reduction agreement given accelerated output declines from Venezuela and uncertainty surrounding Iran’s production levels. In the June STEO, EIA assumes some supply went up from major oil producers in 2019. Depending on the outcome of the June 22 meeting, however, the amount of any supply response is uncertain. EIA currently forecasts global petroleum and other liquids inventories will rise by 210,000 b/d in 2019, which EIA expects will put modest downward pressure on crude oil prices in the second half of 2018 and in 2019.”