For the period of April 2018 to January 2019, the GOJ reported Total Revenues & Grants of $496.55 billion, $3.79 billion more than the Government’s projection. Year over year, this represents an increase of approximately 14.2% relative to the $434.88 billion recorded for the corresponding period in 2017. ‘Tax Revenue’ outperformed projections during the review period, while ‘Non-Tax Revenue’, ‘Capital Revenue and ‘Grants’ underperformed projections. ‘Tax Revenue’ amounted to $433.45 billion, $5.31 billion more than budgeted. Whereas, ‘Non-Tax Revenue’ was recorded at $53.36 billion which was $366.3 million or 0.7% less than budgeted. In addition, ‘Capital Revenue’ totalled $2.51 billion, $274.3 million or 9.8% less than budgeted. ‘Grants’ of $7.23 billion was reported; $884.4 million less than budgeted. Notably, no provisional amounted was booked for ‘Bauxite Levy’ for the review period.

As a result of the decrease in Expenditures for the period April 2018-January 2019, the ‘Fiscal Surplus’ was $14.30 billion, relative to a projected surplus of $4.02 billion. Additionally, the primary balance for the period amounted to $118.94 billion, 6.6% more than budgeted. 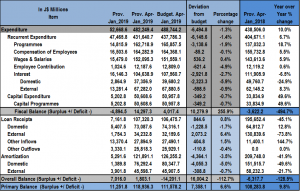 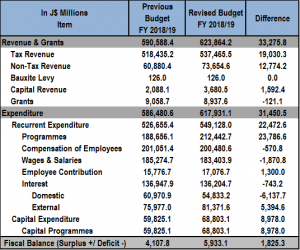 With the further adjustments made in the Second Supplementary Estimates, the projected outturn for the expenditure budget in FY 2018/19 is now comprised of

The FY 2018/19 budget also includes Other Outflows towards:

The Government highlighted that “these outflows have more than doubled over the last fiscal year. Similarly, Other Inflows, which include inflows from the PCDF, have increased year over year. Budgeted Loan Receipts have also been reduced when compared to last fiscal year’s outturn due to a decline in the need for net new financing. Amortization payments decreased over last fiscal year primarily due to the lower maturities for the year, with some contribution from appreciation of the JMD vis-à-vis the USD.”