Government Operations Results for May 2021

Government Operations Results for May 2021

For the period of April to May 2021, the GOJ reported Total Revenues & Grants of $118.58 billion, $8.11 billion more than the Government’s projection. This represented an increase of approximately 58.9% relative to the $74.62 billion recorded for the corresponding period in 2020. ‘Tax Revenue’ and ‘Capital Revenue’ outperformed projections during the review period. ‘Tax Revenue’ amounted to $79.89 billion, $8.13 billion more than budgeted. ‘Capital Revenue’ amounted to $778.20 million during the review period. ‘Non-tax Revenue’ of $37.46 billion was reported, $555.7 million less than budgeted. “Grants” closed the period at $445.70 million, $242.80 million less than the budgeted amount. Notably, no budgeted amount was booked for ‘Bauxite Levy’ and ‘Capital Revenue’. 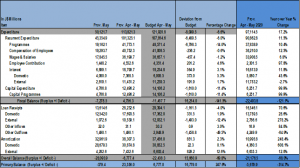