Jamaican Teas Limited (JAMT) reported a 17% decline in revenues to total $378.23 million (2017: $456.15 million). JAMT stated that, “this was primarily due to a stock reduction exercise by the main distributer in the USA. Export sales fell by almost 40 percent overall but domestic sales improved by almost 16 percent.”

JAMT further indicated that, “the reduction in our export shipments is viewed as a temporary situation as the end customer sales of our export distributers, continue to increase on a monthly basis.”

Other income increased grossly closing the period at $32.92 million versus $6.87 million in the prior corresponding year. The Company highlighted that, “Other income increased significantly primarily due to the recognition in the profit and loss account of $26.7 million of fair value gains on the Group’s listed equity securities required under the new IFRS 9 Accounting Standard. In 2017 such gains were included as part of Other Comprehensive Income and not included in the profit and loss.”

Finance cost for the period under review amounted to $5.23 million relative to $4.49 million reported in 2017.

Pretax profits climbed 15%, increasing from $58.83 million in 2017 to $67.45 million in 2018. Management stated that, “this was primarily due to the first time inclusion of certain fair value gains on the group’s listed equity investments.” JAMT incurred tax expenses of $5.73 million compared to $7.53 million during 2017 comparable period.

Net profit for the period rose by 20% to $61.72 million relative to $51.30 million recorded twelve months earlier. While, net profit attributable to shareholders closed the period  at $49.80 million compared to $51.88 million in the prior comparable quarter.

JAMT stated that, “The Company intends to transfer ownership of its supermarket operations from its wholly owned subsidiary JRG Shoppers Delite Enterprise Limited to its joint venture company, Bay City Foods Limited. This transfer will be made in the second quarter and will not have a material impact on the results of the Group. We had previously indicated that this transaction would have resulted in a non-recurring gain of approximately $150 million; since that report the parties decided to modify certain aspects of the transfer terms resulting in the previously estimated gain being reduced to an immaterial amount.” 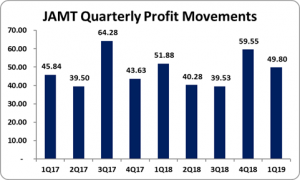