The Food & Drink Division contributed a 35% increase in revenue to total $5.46 billion relative to the $4.04 billion reported in 2017. The company mentioned that, “The Food & Drink Division benefitted from particularly strong year-on-year improvements in our European juice business as well as in our tropical snack food business. In both cases, the improved results reflected our ongoing investment in innovation and new product development. In Europe, we expanded our range of healthy fresh juice recipes with highly innovative vegetable juices, and in our tropical snacks business, we launched a new line of frozen “ready-to-cook” tropical foods for the US market.”

Jamaica Producers also noted that, “We expect the benefits of our Division-wide product innovation programme to continue with the launch of “rum cake bites” under the Tortuga brand. We expect this product to drive sales growth during the winter tourism season.”

Logistics and Infrastructure increased 14% year over year to total $3.83 billion (2017: $3.36 billion). JP highlighted that, “The Logistics and Infrastructure division continues to benefit from significant capital investment and business development initiatives to advance Kingston Wharves as a leading regional multipurpose and multi-user terminal and a market-leading logistics service provider.”

JP’s marketing, selling and distribution expenses rose 14% to close at $1.64 billion, this compares to $1.43 billion booked a year earlier. JP also recorded a share of profit in joint venture and associated company of $33.02 million, relative to a loss of $2.23 million in the previous year.

The company mentioned that, “Jamaica Producers Group and its subsidiaries will continue a programme of investment that is designed to improve its product and service offering while enhancing its operating efficiency. In line with this programme of investment, Kingston Wharves will continue to distinguish itself based on its service levels and its ability to handle a wide range of different types of domestic and transhipment cargo. Accordingly, we are improving the organisation of the shipping terminal and introducing a range of protocols to streamline our systems to allow cargo to be loaded, discharged and processed with less wait time, while providing our customers with an improved overall customer experience. Our juice, bakery and snack businesses are all undertaking structured continuous improvement initiatives that include new production lines, product and packaging innovation and improved sales and marketing activities.” 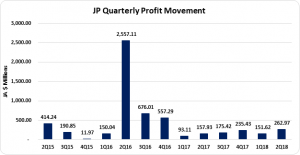