Caribbean Cream Limited (KREMI) for nine months ended November 30, 2020, reported revenue of $1.33 billion compared to $1.24 billion in the corresponding period last year, this represents an 8% increase year over year. Revenue for the third quarter rose 11% to close at $440.83 million compared to $395.48 million for the comparable quarter of 2019. KREMI noted, “Our thrust toward reaching the end consumer with a quality product and affordable pricing is so far achieving the desired growth results and customer satisfaction.”

Administrative Expenses climbed 7% to close at $300.01 million (2019: $279.83 million), while selling and distribution costs fell 15% from $51.26 million in 2019 to $43.35 million. The increase in administrative costs was influenced by, “costs in utilities, repairs & maintenance of the depots, and annual salary increases.,” as highlighted by the Company. Consequently, operating profit for the nine months period amounted to $109.23 million, an increase of 69% relative to $64.82 million booked in 2019.

Furthermore, KREMI added that, “During the quarter the Ocho Rios depot was opened in late September to serve the town and surrounding communities, and to reduce travel time for retailers in the area. The feedback has been positive and one of excitement from both new and existing customers. There have been many encouraging responses regarding product availability, quality, and pricing.” 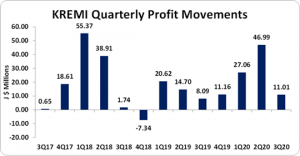