Cost of sales amounted to $4.79 billion, up 26% on the $3.81 billion reported in the prior comparable period. Nonetheless, gross profit recorded an 8% increase year over year, closing at $964.19 million compared to the $896.24 million generated for the same period in the prior year. According to LASD, “ This was due to increase product and logistics costs, which were not immediately recovered through price increases, and the implementation of temporary price promotions to drive volumes.”

Other operating income rose by 13% to end the three months closing at $82.53 million relative to $73.14 million in the corresponding period last year.

LASD stated that, “All key categories delivered growth, led by the Nutrition flagship brand LASCO Food Drink, which continued to expand its leadership position. The beverage category benefitted from the reopening of several distribution channels which were closed during the first quarter of financial year 2020/2021.” 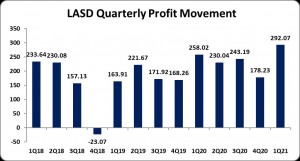