Profit before taxation increased to $855.04 million for the period under review, an increase of 51% on $566.01 million reported in the same quarter last year.

Total comprehensive income for the quarter amounted to $655.42 million compared to $280.92 million booked for the first quarter of 2019. SEP noted, “due largely to efforts made in prior years to strengthen the business fundamentals. These efforts include consolidation of the dairy factories, increasing exports and expanding the distribution footprint through the acquisition of the Facey Consumer business.”

Management also noted, “The sugar manufacturing operation was discontinued in July 2019. As required by accounting standards, the losses from this operation are presented as a single line item in the Statement of Comprehensive Income until the operation has been disposed of (losses for historical periods have also been re-presented in this manner for comparability).” 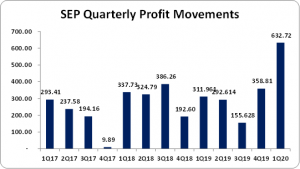