SVL mentioned that, “lotteries performed creditably during the period achieving segment results of $1.7B. The increase in gross ticket sales by $468.27 million is the major reason for the positive performance.”

Additionally, the Group stated that, “the Sports betting segment reported results of $17.9 million and gross ticket sales of $717.1 million reflecting a positive uplift which was largely impacted by the cancellation of major leagues and tournaments during April to June quarter.”

“The Horse racing segment recorded losses of $206 million which was a direct result of the closure of the race track operations from March to June. While, PIN codes sales achieved an increase of 5% to reach $5.7B for year to date, thereby generating growth on segment results to achieve $125.1 million,” SVL stated. 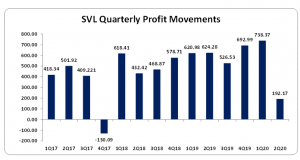