For the period 2007 to 2017, the EU had a trade surplus (meaning larger exports than imports) with the United States. This trade surplus has fluctuated slightly, but has increased overall during the period and reached EUR 120 billion in 2017. 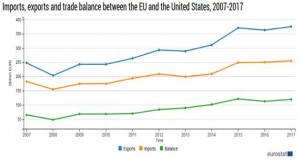 The United Kingdom and Germany: largest traders with the United States among the Member States