tTech Limited (tTech), for the nine months ended September 30, 2020, booked a marginal increase in revenues to $262.63 million compared to $262.08 million recorded for the prior financial year’s corresponding period. Revenue for the third quarter declined 12% to $92.35 million relative to $105.17 million for the same quarter of 2019.

Consequently, no taxes were recorded for the period, thus net profit for the nine months amounted to $18.26 million versus $27.99 million booked for the same period of 2019. Net profit for the quarter declined 51% to $5.54 million relative to $11.35 million reported for the third quarter of 2019.

The noted, “Digitalization and Digital Transformation has become the most important topics in leadership circles with the pandemic being the biggest catalyst. tTech delivers value to its customers by allowing them to outsource infrastructure management that has become increasingly complex for organizations whose IT resources are stretched as a result of a growing demand for mission critical digital projects. During the quarter we successfully onboarded a number of new customers, while managing service improvement projects for several existing customers.”

Furthermore, “In July tTech had reopened its office in response to the government’s “back to office” call. However, as the number of COVID‐19 cases spiked in August we reverted to working from home for the safety of our team members. Despite these changes, our support team managed to address support incidents very well, meeting and, in many cases, exceeding our customers’ service level agreements.” Also, “As more companies have their employees working from home rather that in office, the risks associated with Cybersecurity have increased. This has led to tTech reminding organizations of the Cybersecurity risks associated with remote work from home while offering services to mitigate the risks. During the quarter we also focused on educating the market about tools & technologies for Remote Work, Business Continuity as well as IT Security. For further information on these topics please visit our social media pages on Facebook, LinkedIn, Instagram and Twitter,” stated the Company. 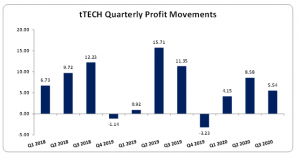