Other operating income decreased in the first quarter of 2021 to $11.52 million, this compares to $24.35 million for prior year’s period, representing a decrease of 53% year over year.

As a result, total revenues decreased by 36% to $18.92 million for the first three months in review. This compares to the prior year’s amount of $29.68 million.

Consequently, profit from operations for the first quarter of 2021 fell to $7.21 million from the prior year’s figure of $7.66 million, representing a 6% decrease year over.

1834 reported a share of profit from interest in associate of $7.94 million for the quarter under review, up from $2.04 million reported for the prior year’s corresponding quarter.

Consequently, profit from operations before taxation amounted to $14.80 million for the first three months ended June 30, 2021 relative to $9.49 million recorded for the corresponding period in 2020. 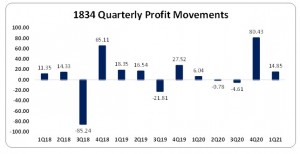