iCreate Limited (ICREATE) for the six months ended June 30, 2021 reported revenues of $23.86 million, 39% down from $39.27 million reported a year ago. For the quarter, ICREATE posted revenue of $15.44 million (2020: $14.76 million). Management noted, “ The uptick in revenues, for the June 20, concluded second quarter, was driven by our corporate partnership and growth in our business to consumer (B2C) market through our Digital Marking training programme.”

Consequently, net profit for the six months period amounted to $4.44 million versus a profit of $3.09 million twelve months earlier. For the second quarter, net profit totalled $2.53 million compared to a net profit of $1.84 million booked in the corresponding quarter last year. 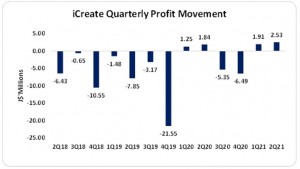