For the nine months ended June 30, 2022 Jamaican Teas Limited (JAMT) reported a 4% increase in revenues to total $1.82 billion (2021: $1.75 billion). For the quarter, revenues amounted to $648.57 million a 22% increase when compared to $530.71 million in the previous corresponding period. According to management the increase was partly due to “Export manufacturing sales rose a strong 40 percent in the quarter as the division overcame the shortage of raw materials required to fulfill orders of finished products experienced earlier in the year. Local sales improved by 10 percent in the quarter over 2021.”

Other income for the period fell by 78% to $97.35 million versus $451.13 million recorded during the prior year’s corresponding period. Other loss for the quarter closed at $131.76 million, which reflects a 162% decline when compared to other income of $211.26 million documented for the same period last year.

As at June 30, 2022, the Company total assets amounted to $4.59 billion, an increase of 12% when compared to the $4.09 billion reported as at June 2021. The largest contributor of this increase was ‘Housing under construction’ which totaled $517.62 million (2021: 224.57 million). Management stated, “The increase in Housing under Construction since September 2021 is a result of the build out of Belvedere while the increase in receivables resulted, in part from the growth in revenues reported above.” 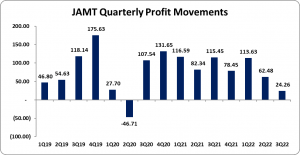