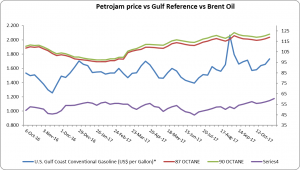 An increasingly large share of U.S. distillate production is exported

U.S. distillate exports have continued to increase significantly over the first part of 2017, setting record highs for three consecutive months from May through July  before declining in August (at least partially as the result of hurricane activity). At the same time, U.S. distillate demand was relatively stable, increasing only slightly from January through July 2017 compared with 2016 levels.

Although January through July 2017 average exports of distillate to Europe fell compared with the same period in 2016, U.S. refineries in the Gulf Coast are geographically well positioned to export to Mexico and to countries in Central and South America, and distillate exports to these locations increased. In addition to increased export demand, high distillate crack spreads (the difference between distillate prices and crude oil prices) encouraged refinery runs. During this period, overall demand outpaced production and inventories fell.

While the January-through-July average distillate product supplied (a proxy for demand) increased slightly, from 3.8 million barrels per day (b/d) in 2016 to 3.9 million b/d in 2017, the growth in exports increased more quickly. From January through July 2017, U.S. distillate exports averaged 1.4 million b/d, nearly 195,000 b/d more than in the same period in 2016.

Distillate exports from the United States set record highs in May, June, and July 2017, reaching 1.5 million b/d, 1.6 million b/d, and 1.7 million b/d, respectively. In August, exports of distillate fell to 1.4 million b/d, due at least partially to Hurricane Harvey, which made landfall in Texas as a Category 4 hurricane on August 25 and resulted in port closures. August data reflects the significant impact of hurricanes this year and may not be indicative of distillate demand or export trends. As exports of distillate have increased, they have accounted for a larger share of net production .