Consequently, this resulted in profit from operations of $56.76 million, this compares with the operating profit of $41.79 million reported for the corresponding quarter for prior year.

Profit before taxation amounted to $56.05 million for the first quarter ended December 31, 2019. This compares $39.67 million booked for the prior corresponding quarter. Net profit totaled $49.12 million for the period, relative to $38.10 million reported in 2018.

The company noted that “In November 2019, Honey Bun launched The Honey Bun Foundation whose mission it is to support SMEs and the Creative Sector, through the development of strategic business models. The foundation is a program of corporate social responsibility, which places our interest squarely on support for companies based on our own experience of growth. We believe that our intervention will provide the support to positively impact Jamaica’s economic growth through the development of the country’s entrepreneurial ecosystem.” 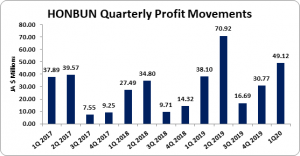