Administrative expenses climbed by 25% for the period, to total $619.14 million versus $496.40 million in 2018, while selling and promotion closed the six months at $57.08 million (2018: $35.56 million). FTNA stated, the increase in operating expenses was “due primarily to the addition of the Waterloo Square location. The grand opening, media launch, lease expenses, staff expenses and other associated costs account for the bulk of the increase. Expenses were also impacted by the adoption of the new accounting standard on leases, IFRS 16, in July 2019.”

Finance Cost for the six months totalled $38.66 million, a 123% increase when compared to the $17.31 million recorded for the same period last year, while other income amounted to $27.59 million relative to $16.58 million the prior year.

There was no taxation charge for the six months period ended December 31, 2019, however, Income taxes for the corresponding six months period in 2018 was $39.81 million. Consequently, Net Profit increased by 22% to end the period at $213.04 million relative to $174.90 million recorded the prior financial year. Net profit for the quarter amounted to $194.67 million, a 48% increase compared to $131.86 million booked for the prior quarter of 2018.

As at December 31, 2019, total assets amounted to $3.32 billion, up $1.37 billion from $1.96 billion as at the previous year. The increase in total assets was as a result of the increase in ‘Property, plant and equipment’ and ‘Right of use asset’ which closed the period at $789.41 million (2018: $212.26 million) and $887.88 million (2018: nil) respectively. The company mentioned that, “this was due primarily to the increase in fixed assets for the new Waterloo store, as well as the impact of IFRS 16 where the value and liability associated with right of use leased properties are now recognized on the balance sheet.” 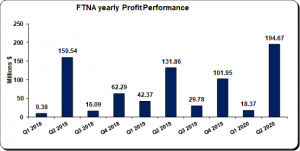