Management noted, “This is attributable to our continuous overly cautious approach to loan loss provisions. The quarter over quarter improvement however, is a signal for management that steps to strengthen its collections framework and the continuation of the transformation of the business are beginning to bear results.”

Additionally LASF highlighted, “in managing its strategic risks continues to make adjustments to its business model to remain relevant to its customer base. Our LASCOPay prepaid epay Mastercard which was launched in the last period of the second quarter is one of the responses to an industry risk. The card gained traction for the third quarter and as more of our customers adopt, we expect continued growth and relevance of this product.” 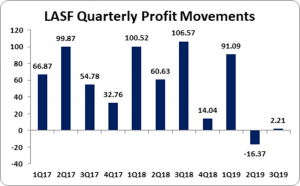