Cost of sales (COS) also increased by 4% for the period to US$969,861 (2018: US$932,368), while for the quarter a 2% increase was observed totalling US$468,941 (2018: US$460,982). The company noted that they, “improved on scheduling and logistics planning so there were reduced requirements to source higher priced supplies from the local purveyors. The change in the regulations relating to the administration of Gratuity resulted in additional cost to the company for employee benefits. All other categories were in line with prior year or increased in line with the revenue increase.”

There was no finance cost incurred for the first six months ended November 2019 versus finance cost of US$336 reported in the similar period last year.

The Company noted that, “Expenditure for the 6 months was just under US$79,000 moving from US$74,0000 at the close of the first Quarter. Expenditure was mainly in Building repairs and embellishment carried out by the Landlord, with changes being passed on to us. These repairs relate to Hurricanes Irma and Marie in 2017.”

MTL stated, “We are now deep into the Third Quarter and approaching the busier part of the winter tourist season. Approximately 60% of the revenue and profits are earned in the second half of our fiscal year and we are encouraged by the trend so far. The processing of work permits has been going at a satisfactory pace. A number of open vacancies were filled prior ro the start of winter season, albeit at increased costs to the company.” 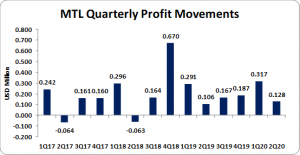