Gain on disposal of available for sale securities amounted to $23.23 million, up $18.46 million when compared to $4.78 million recorded the prior year. SIL noted this was, “As a result of the strategy employed to increase trading activity in the portfolio.

Foreign exchange gains fell to $11.46 million compared to $52.43 million booked the prior year’s period. SIL indicated that the decrease was due to, “the lower rate of depreciation of the Jamaican dollar, which led to a 78.1% reduction in unrealized foreign exchange gains.”

Operating profit recorded for the period amounted to $67.88 million relative to $87.89 million booked for the prior year. Operating profit for the quarter closed at $20.53 million, a 6%  decline year over year from $21.91 million.

Preference dividend expense for the nine months totalled to $8.30 million, a decrease of 5% relative to $8.75 million last year.

As at September 30, 2016, the company’s assets totaled $1.23 billion, 24% more than $986.76 million a year ago. This resulted mainly from an increase in investment securities which closed at $1.19 billion, 25% higher than the $950.34 million booked as at September 2016. SIL noted, “This was funded primarily by a combination of greater use of margin, retained earnings, the Dividend Reinvestment Programme (DRIP) and the Complementary Share Purchase Programme (CSPP).” 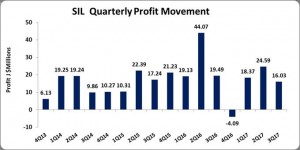