Sterling Investments Limited (SIL) for the year ended December 31, 2018 reported a 22% increase in total revenue to $110.44 million compared to $90.66 million recorded for the corresponding period in 2017, “reflecting increased foreign exchange earnings and trading gains” the Company noted. Of total revenue:

The Company also noted, “Despite improvements in key figures, SIL noted that the global capital markets were characterized by extremely high levels of volatility in the last quarter of 2018 which led to bond and equity prices declining significantly”

Total comprehensive loss for the year amounted to $21.71 million compared to the income of $58.08 million booked for 2017.

As at December 31, 2018, the company’s assets totalled $1.21 billion, 3% more than $1.17 million a year ago. This resulted mainly from an increase in ‘Investment Securities’ which closed at $1.16 billion, 5% higher than the $1.11 billion booked as at December 31, 2017.  SIL indicated that “SIL has used the decline in prices as an opportunity to purchase undervalued assets that it believes will appreciate over time.” 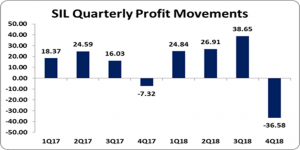