Foreign exchange gain amounted to $77.71 million, a significant increase compared to the gain of $64.29 million booked the prior year’s quarter.

Other expenses for the period totalled $24.61 million, an increase of 38% from $17.90 million reported in the prior comparable period. SIL booked an impairment loss on financial instruments of $11.64 million, 519% greater than $1.88 million posted for the same period in 2020.

Management noted, “Throughout 2020, SIL was able to generate significant increases in its income, US$ dividends and capital gains. During the first quarter of 2021, SIL took advantage of brief spikes in volatility and intermittent market declines to acquire attractive assets and lock in good income and yields for the future. However, during the second quarter of 2021 SIL remained patient and prudent in it’s portfolio positioning. The company slowed the pace of asset acquisition and took profits on some positions in the portfolio.” 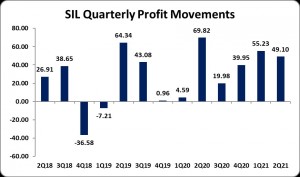