Consequently, Profit before taxation amounted to $17.56 million relative to $3.51 million in 2020, representing an 400% increase year-on-year for the period. 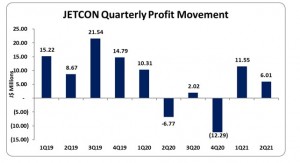