Transjamaican Highway Limited (TJH), for the nine months ended September 30, 2021, reported a 15% increase in revenue to US$37.46 million relative to US$32.63 million in the corresponding period last year. Revenue for the third quarter amounted to US$13.09 million (2020: US$11.22 million), a 17% increase. TJH noted that, “This increase is as a result of the difference in measures implemented to combat the spread of the virus.”

Other gains amounted to US$1.58 million for the nine months ended September 30, 2021 relative to other losses of US$68,000 for the comparable period in 2020. Whereas, for the quarter ended September 30, 2021 other gains totalled US$53,000 relative to other losses of US$126,000 in 2020. The Company highlighted that, “Other gains and losses are comprised primarily of the gains produced by financial market operations and resulting financial income on investment instruments and the change in value of equity investments. Under the Concession Agreement, the Company also has the right to collect revenues generated from commercial exploitation of the areas surrounding the Toll Road, including gas stations and related ancillary services, electricity and telecommunication cables and fiber optics.” Furthermore, the increase in other gains, “was primarily due to exchange gains realized on the revaluation of the 8.0% (JMD) Cumulative Redeemable Preference Shares and also resulted from Interest earned on the investment of the Restricted Cash,” as per Management.

For the nine months ended September 30, 2021, operating expenses totalled US$25.06 million versus the US$26.99 million in the comparable period last year, a 7% decrease year over year. Whereas, operating expenses for the third quarter fell by 12% to amount to US$8.56 million (2020: US$9.76 million). The Company noted that the decrease in operating expenses “was primarily due to lower maintenance cost and lower amortization of the intangibles (now being assessed and adjusted on a quarterly basis, rather than at year-end as per prior years). This was offset by an increase the Operator’s fixed fee.”

Administrative expense decreased 20% to US$712,000 (2020: US$885,000) for the nine months ended September 30, 2021. For the third quarter, there was a 9% increase in administrative expenses to total US$217,000 (2020: US$199,000). TJH mentioned that, “this increase was primarily due to low third quarter billing for executive compensation for which an adjustment was made during Q4 2020,”  and the nine months “was impacted by lower overall staff cost (including executive compensation) and savings in travel expenses.”

Finance cost amounted to US$11.51 million (2020: US$13.34 million) due to “the savings realized from the debt restructuring which saw our existing loans being repaid and the Secured Notes being issued during the first quarter of last year,” as per Management. Finance cost for the third quarter ended September 30, 2021, equalled US$3.85 million when compared to US$3.88 million for the corresponding quarter last year. 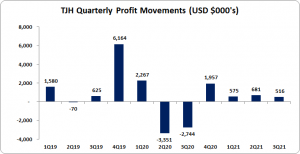