The U.S. current account deficit in the second quarter of 2019, decreased by $8.0 billion, or 5.9%, to $128.2 billion from the revised first quarter deficit of $136.2 billion. This reflects the combined balances on trade in goods and services and income flows between U.S. residents and residents of other countries.

According to statistics from the U.S. Bureau of Economic Analysis (BEA), the second quarter deficit amounted to 2.4% of current dollar gross domestic product, relative to 2.6% in the first quarter. In addition, BEA noted, “the $8.0 billion narrowing of the current account deficit in the second quarter mainly reflected an expanded surplus on primary income.” 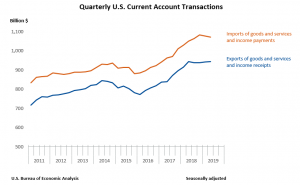