During the week ended June 12, the advance unadjusted insured unemployment rate stood at 2.3% a decrease of 0.1 percentage point compared to the previous week. The advance unadjusted level of insured unemployment in state programs totaled 3,210,285, a decrease of 94,092 (or -2.8%) from a week earlier. The seasonal factors had anticipated an increase of 50,364 (or 1.5%) from the previous week. 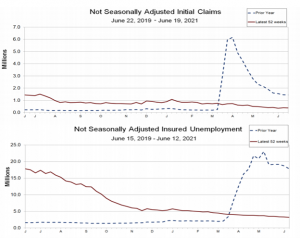 For the week ended the 12th of June, 905 former Federal civilian employees claimed for UI benefits, an increase of 292 relative to the previous week, whereas 569 newly discharged veterans (+141) claimed for benefits.

However, for the week ended the 5th of June 5, 10,764 former Federal civilian employees claimed for UI benefits, a fall of 276 relative to the previous week, whereas 6,554 newly discharged veterans (+205) claimed for benefits.