Expenditure growth in on food services and accommodations, recreation services, and health care were the main contributors to the decrease in national PCE in 2020, which fell by 20.5% 28.6% and 6.1%, respectively.

However, spending on housing and utilities increased 3.8% and was the leading contributor to the increases in Idaho, Utah, and Montana. PCE rose in only four states, Idaho, Utah, Montana, and Arkansas. 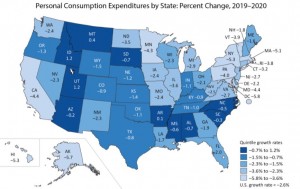