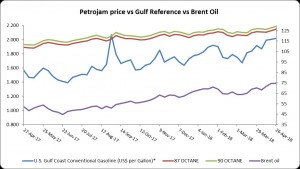 Some market participants think that there should be an oil price benchmark based on local supply and demand conditions due to the steady increase in Asia-Pacific oil demand. The trading of the new Shanghai crude oil futures contract in China commenced last month. The contract can only become regionally accepted as benchmark if it appeals to majority of the market participants and its usage for price discovery must be established.

Unlike the Asian market who does not have a widely traded benchmark contract, North America and Europe both have oil futures contract namely, West Texas Intermediate (WTI) and Brent, respectively. The Dubai Merchantile Exchange’s Oman future contract is viewed as one belonging to the Asian Crude oil market. However, the volume traded, and its open interest continuously stands at a low level since the formation in 2007 which clearly suggests that market participants have not gravitated towards it.

“The Asia and Oceania region represented more than 35% of global petroleum and other liquid fuels demand of last year, a rise from the 30% of petroleum demand in 2008.” Crude oil is used by many in the region who depend on it to meet domestic demand. “Imports to a select group of Asia-Pacific crude oil importing countries averaged a record-high 24 million barrels per day (b/d) in January 2018.” With an increase in trades across the region, a benchmark futures price that supports the local demand and supply environment could positively affect how market participants manage price risk.