Earnings before interest, tax, depreciation & amortization (EBITDA) for the period amounted to $605.96 million, a decline of 11% relative to $684.34 million booked for the prior year’s corresponding period. CCC noted this, “This performance was mainly driven as a result of the scheduled annual maintenance of Kiln 5 and Mill 5, performed during February and March of 2018. Our investment in maintenance efforts will no doubt increase our operational efficiencies with the goal of driving exports, in due course.”

Net profit for the first quarter closed at $334.32 million relative to net profit of $460.36 billion booked for the corresponding quarter in 2017, a decrease of 27% year over year.

Total comprehensive income for the period closed at $347.81 million, relative to $460.36 million for the corresponding period in 2017.

CCC highlighted, “The Board of Directors and Management of Carib Cement are pleased to report that the agreement with our parent company Trinidad Cement Limited (TCL), for the acquisition of Kiln 5 and Mill 5 has been signed, thereby terminating the lease agreement. The initial payment of $1.3 billion towards the acquisition represents a significant investment in plant and equipment, improving the company’s asset base. This is proof that Carib Cement remains committed to achieving success and continues to strive to live up to its slogan of ‘Building a Greater Jamaica”

Lastly, management indicated, “The coal mill project is currently in the final stages and production is expected by the end of the third quarter of this year. This will continue to contribute to the plant’s operational efficiency and also to a reduction in operating costs.” 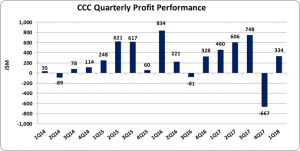