Foreign exchange trading and translation gains declined to a total of $27.29 million for the period, compared to $62.25 million recorded in the previous year. Other Income amounted to $7.89 million, up from $301,000 reported for the comparable period in 2016.

BIL noted, “The outlook remains positive as the local and international economics continue to show steady improvement. We will continue to focus our attention on enhancing value for our shareholders through cost management and taking advantage of strategic investment opportunities.” 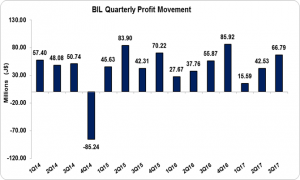