Carreras Limited reported Operating Revenue of $2.82 billion, 16% lower than the $2.62 billion booked in 2016. Cost of Operating Revenue also decline year over year by 19%, amounting to $1.39 billion from $1.71 billion.  As such, Gross Operating Profit declined by 13% to total $1.42 billion. Carrerras “We continue to reiterate the point that there is a direct relationship between high taxes and its impact on the legal volumes, Government’s revenues and the rise of the illicit trade. Affordability concerns for consumers are becoming apparent, when prices are too high in comparison with available incomes and what customers are willing to pay”.

The earnings per share (EPS) for the period was $1.56 as compared to $1.77 for the corresponding period oflast year.  The number of shares used in the computations amounted to 485,440,000 units. 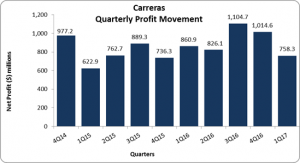