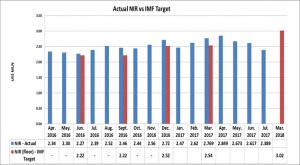 The country surpassed the benchmark of US$2.56 billion outlined by the International Monetary Fund in the 14th Review and Adjusted Agreement under the Extended Fund Facility (EFF). Jamaica and the IMF have entered into a New Agreement to support growth and create jobs with the international body citing, “Jamaica has made good progress under the previous IMF – support program.” As such the entity has approved a new US$1.64 billion loan for the country. According to the IMF the loan is, “intended as insurance to support the country’s ongoing reform program to tackle poverty, create jobs, and improve living standards.” As such the Net International Reserve (NIR) target outlined as per the new agreement for the 2017/18 fiscal year is US$3.02 billion (see figure 2 above).