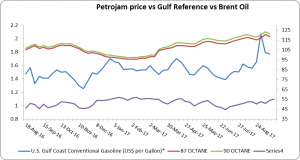 Hurricane Irma has created several issues with gasoline markets in Florida, both by prompting increased demand and disrupting the supply chain needed to deliver gasoline. Hurricane Irma made landfall in South Florida on September 10 and proceeded on a northwesterly path up the length of the state. Because of the evacuation of people in anticipation of Hurricane Irma, demand for transportation fuels and the logistical challenges in supplying Florida began before it made landfall. As Hurricane Irma approached, shipping traffic was diverted and ports closed, stopping the flow of petroleum products into Florida. People filling their gasoline tanks in anticipation of the storm resulted in a rapid increase in demand. In Hurricane Irma’s aftermath, demand is slowly returning to normal levels, allowing time for resupply to arrive and supply chains to adjust.

There are no refineries in Florida or pipelines connecting Florida to supply centers along the U.S. Gulf Coast or any other state. Therefore, unlike most other parts of the country, Florida is almost entirely supplied by marine movements of petroleum products from domestic and international sources.

Resupply of gasoline will arrive through several large ports located along Florida’s coastline, each transporting fuel to nearby markets via truck and short-distance pipeline. Terminals within the Port of Tampa supply much of the state’s west coast. South Florida is supplied via terminals in Port Everglades, just north of Fort Lauderdale. Central Florida is supplied via pipeline from Tampa and Port Canaveral on the Atlantic Coast. Northeastern Florida is supplied by terminals in the Port of Jacksonville. The only product supplied to Florida through a pipeline is sourced from a terminal in Bainbridge, Georgia that is connected to the Colonial Pipeline system and supplies the Florida panhandle by long-distance tanker truck. The rest of western Florida is supplied via truck and barge movements via the Intracoastal Waterway from nearby refineries in Alabama and Mississippi (Map – Product Supply – Florida (PADD 1C)).