138 Student Living (138SL), for the nine months ended June 30, 2018, Revenue increased by 54% to $617.40 million relative to the $402.18 million recorded for the corresponding nine months period the prior year. Other operating income also increased for the period under review, growing 21% to $26.77 million relative to $22.10 a year earlier. Revenue for the second quarter rose 34% to $205.50 million (2017: $153.22 million), while other operating income climbed 27% to $10.90 million (2017: $8.57 million). The company mentioned that, “Revenue continues to be less than optimum as the rental rates granted for rooms at Irvine Hall under the second concession continue to be less than that contemplated in the Financial Model forming a part of that Concession; a matter that is under discussion with the University of the West Indies, the Grantor of the Concession.”

The company stated that, “The issues under discussion with the University are therefore critical not only to the financial performance of 138SL Restoration but to the overall performance of the Group.” 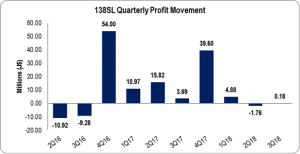