138SL’s Revenue decreased by 44% to $255.56 million relative to the $455.24 million recorded for the corresponding period last year. Management noted that, “The difference in revenue quarter over quarter is due  to the Irvine Hall variation claim.”  Other operating income for the period under review rose by 136% to $20.53 million compared to $8.70 million a year earlier.

Consequently, net profit totalled $65.92 million compared to a profit of $182.86 million in the prior corresponding period.

Notably, Management stated, “During the period under review, 138SL operated 1,464 world-class rooms at its 4 locations on the UWI Mona Campus consisting of 1,692 beds. While the Covid-19 pandemic continues to negatively impact the business operations, measures have been put in place to mitigate these negative effects as we manage the economic fallout.” 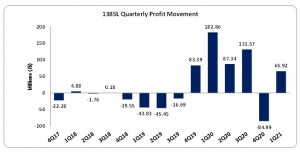