Profit before taxation for the year end amounted to $310.37 million, significant improvement from 2019 loss of $19.61 million. The Company explained, “This result continues to be positively impacted by: (i) effective management of operating costs (primarily utilities) and (ii) variation claims relating to Irvine Hall. The latter item includes a variation claim for the full year 2019 as well as the claim for the year 2020. Adjusting for the variation claims, the group recorded year-to -date profit amounting to $78M.” Loss before taxation for the quarter amounted to $12.47 million relative to a profit of $142.98 million booked twelve months earlier.

138SL noted, “The Covid-19 pandemic has had a negative impact on our long-term occupancy revenues which saw occupancy before March 2020 of 99% falling to levels below 20%. This translates into a reduction in long term rental revenue for the fourth quarter of approximately $101M.”

Furthermore, “The University of the West Indies moved classes online for the first semester effective September 7, 2020. As a result, students who had previously applied for on-campus accommodation, decided to defer their accommodation requirement to the next semester.” the Company mentioned. 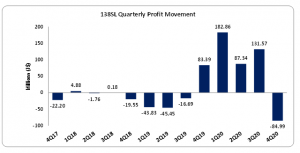