Furthermore, no loss from disposal of subsidiaries was reported compared to a loss of $1.90 million in 2019. Share of profit from interest in associate, net of tax totalled $15.84 million compared to $6.43 million booked twelve months earlier.

Total Shareholders’ Equity as at December 31, 2020 remained the same YoY to close at $1.42 billion. This resulted in the book value remaining at $1.17 year over year. 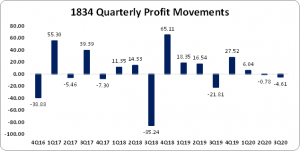