Medical Disposables & Supplies Limited (MDS) for the three months ended June 30, 2019, reported revenue of $557.23 million, an increase of 3% compared to the $541.11 million booked in 2018. This according to Management, “reflected modest in sales. This performance was attributed mainly to price adjustments, given a dip in unit sales across our consumer product lines.”

As a result, Operating Profit closed the first quarter at $38.73 million relative to $31.33 million in 2018, this represents a 24% increase. MDS reported Loss on Foreign Exchange of $9.40 million versus a loss of $4.20 million twelve months earlier. This according to MDS was due mainly to, “the devaluation of the Jamaican Dollar in relation to the United States currency.” 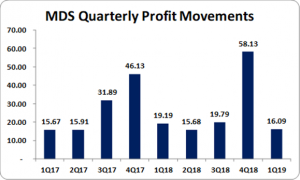