Derrimon Trading Limited (DTL), for the three months ended March 31, 2021,reported trading income of $4.01 billion compared to the $3.32 billion booked for the prior year’s comparable period, a 21% increase. This is as a result of, “Derrimon Trading’s new 80% subsidiary holding, Marnock LLC, which was acquired during this quarter and provided a boost to revenue.” Also “During this quarter the new Covid-19 restrictions imposed, namely reduced operating hours, resulted in a negative impact on the revenue of the various Companies within the Group,” according to DTL.

Other income for the period under review rose slightly by 1% to close the quarter at $22.77 million relative to $22.65 million booked in the prior comparable period.

It was noted that the increase in operating expenses was, “driven by new expenses from our new subsidiary Marnock LLC, increases in lease payments and the exchange rate translation given the depreciation of the Jamaican Dollar to the US Dollar, trucking and delivery charges, cost associated with the new Distribution Centre, utilities and increased insurance charges given the requirements of the US jurisdiction,” as noted by Management.

For the quarter, finance cost closed at $23.24 million versus $49.30 million in the 2020, a 53% decline year over year. The Company stated, “during the quarter, the strategy of liquidating short-term debt and early retirement of long-term debt was an important utilization of the capital raised from the Additional Public Offer. As a result of the immediate implementation of this strategy.”

DTL highlighted that, “during the quarter under review, our partnership with Barita Investments Limited ensured that DTL successfully completed the largest Additional Public Offer by a JSE Junior Market Company, raising new capital of J$4.08 billion which will assist with the transformation of our Company. Other notable transactions and achievements in the quarter include: Completion of the purchase of FoodSavers New York (New York), completion of the purchase of Good Food For Less (New York), liquidation of J$1.92 billion in short and long term debt, J$1.12 billion invested in both US Dollar and Jamaican Dollar instruments, commencement of work on the building out of a new supermarket and acceleration of the implementation of our new group technology platform.” 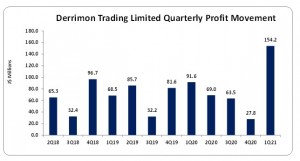