tTech’s administrative expenses rose 5% year over year to $58.18 million (2021: $55.30 million) and ‘Other operating expenses’ rose by some 56% to $7.47 million vs $4.79 million recorded in Q1 of 2021. Owing to the proportionately larger increase of expenses to revenue, tTech reported an Operating Loss of $5.11 million relative to the operating profit of $4.90 million booked the prior year. In their quarterly report, tTech’s CEO gave the following insight: “The increase in expenses, the inability to close some projects primarily due to the continuous global supply chain issues, and contract terminations towards the end of 2021 contributed to tTech experiencing a challenging first quarter.”

Management noted that. “During the period under review, we successfully presented our new Advanced Security Services to prospects and customers, who showed great interest in demonstrations and proof of concepts. In recent years, the sophistication of cybersecurity threats has increased tremendously, and many businesses are no longer protected by the entry level solutions that they currently have in place. We have been testing Artificial Intelligence based Endpoint Protection Solutions and we are now offering these solutions to customers.” Further adding, “tTech has been participating in several sensitization sessions on data privacy & data protection including celebrating Data Protection Day in January where we introduced Jamaica to the newly appointed Information Commissioner Celia Barclay. There is increased interest in services related to Data Privacy & Protection as the deadline date for compliance is now written law.” 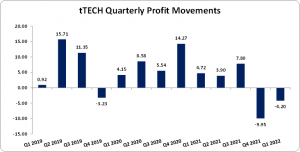