AFS reported an increase income from both Money Services and Other Income to total $1.50 million (2018: $1.30 million) and $56.42 million (2018: $29.47) respectively. The company also reported Foreign Exchange gains of $2.62 million, a 65% decline when compared to $7.41 million in 2018. Consequently, other operating income for the period amounted to $60.54 million, a 59% increase relative to the $38.17 reported for the same period in 2018. Additionally, net operating income closed the period under review at $1.69 billion (2018: $1.33 billion). While, for the quarter ended December 31, 2019, net operating income totalled $580.80 million (2018: $477.51 million). Management mentioned, “In order to achieve the significant growth in the loan portfolio, margins have declined due to the competitive nature of the market. The increase in Net Fee & Commission Income of $385 million year over year is due to Embassy Loan’s business model to generate higher fee revenues.”

AFS recorded total operating expenses of $1.28 billion, an increase of 90% compared to $676.42 million in 2018. Of this, ‘Staff Costs’ increased 57% to $522.19 million (2018: $331.94 million) and ‘Allowance for Credit Losses’ amounted to $307.59 million, an increase of 288% compared to $79.19 million booked for the prior year’s corresponding period. ‘Depreciation & Amortization’ and ‘Other Operating Expenses’ booked for the period $38.64 million (2018: $21.65 million) and $361.32 million (2018: $220.86 million) respectively. The company noted, “excluding the allowance for loan losses, operating expenses for the period increased by $379 million year over year, which was mainly attributable to Embassy Loans. Allowance for credit losses increased with the growth in Access’s loan portfolio, the inclusion of Embassy Loans, and the change to the expected credit loss model which is required to comply with IFRS9.”

AFS reported a profit before taxation of $407.66 million relative to $652.49 million in 2018. AFS booked a profit for the period of $368.50 million (2018: $583.68 million), after tax charges of $39.15 million (2018: $68.81 million). Net profit for the quarter amounted to $88.87 million compared to a profit of $188.07 million booked for the comparable quarter of 2018. The Company noted, “This represents a 37% decline in net profit year over year which is attributable to lower interest margins and increase allowances for credit losses in keeping with the significant growth in the loan portfolio. The results for the period was also impacted by increased income taxes as the 10-year Junior Market tax concession, has expired. In addition, it includes the consolidation of the performance of Embassy Loans Inc. (Embassy Loans), which was acquired on December 15, 2018.” 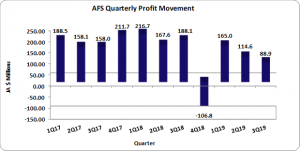