Foreign exchange trading and translation amounted to a loss of $138.12 million compared to a loss of $25.91 million recorded in the previous year. BIL indicated, “Our local currency strengthened over the reporting period, resulting in the Group realising an increase in foreign exchange translation losses when compared to the same period last year. With the Jamaican dollar closing the period at J$125.02 (the BOJ’s mid-point weighted average buy and sell exchange rates), the segment closed the period with a loss of $196.6 million. The Group has taken a decision to actively manage its foreign currency  exposure with the objective of reducing the volatility of future earnings arising from foreign exchange movements. The foreign exchange trading (cambio) benefited from market conditions, reporting a gain of $58.5 million compared to $21.0 million for the prior period. Other income for the six month period closed at $1.71 million (2018: $616,000), a growth of 177% year over year.” 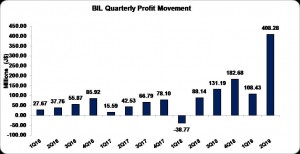