For the nine months ended June 30, 2019, Barita Investments Limited (BIL) recorded a 40% increase in interest income, amounting to $1.04 billion relative to $738.32 million for the comparable period in 2018. Interest expense also recorded an increase to close at $598.85 million compared to $431.36 million in 2018. As a result, net interest income improved 42% to $436.90 million relative to $306.96 million in 2018. Management noted this was, “due to a combination of increased portfolio size and improved net interest margin management.” Net interest income for the quarter closed at $180.48 million, 53% above the $117.64 million reported for the prior year’s corresponding quarter.

Dividend income rose 40% to total $20.89 million compared to the $14.97 million earned for the nine months ended June 30, 2018. Gains on sale of investment increased significantly by 1007%, to $1.24 billion (2018: $111.59 million). BIL stated, that, “gain on investment activities include $1.03 billion related to equity investments under IFRS 9, which was adopted by the Group on October 1, 2018.” Management also noted, “this segment relates to the management of our cambio and proprietary trading portfolio, closed the period registering a 756.8% increase to $1.3 billion when compared with $154.6 million reported in the prior financial year. This was largely driven by fair value gains on investment ($1.03 billion), gains on sale of investment ($203.9 million) for the period, and foreign exchange trading income ($88.6 million). Realized trading income therefore totalled $310.8 million, representing a YoY growth of 227.8%. The key enablers to the growth in trading activity are the increased capitalization of the Group together with the positive year to date performance of the investments held by the company.”

Foreign exchange trading and translation amounted to a gain of $88.59 million compared to a gain of $42.96 million recorded in the previous year’s period. BIL noted, “our local currency has strengthened during our financial year-to-date, resulting in the Group incurring foreign exchange translation losses when compared to gain recorded in the corresponding period last year. The Jamaican dollar closed the period at J$130.5 (the BOJ’s mid-point weighted average buy and sell exchange rates) versus the US dollar, leading the segment to close the period with a loss of $18.3 million. we have however seen a reduction in the adverse effects of FX translation losses on the Group’s financial statements in the most recent quarter ended June 2019 due to an increase in the active management of the Group’s foreign currency exposure.”

Fees & commissions income rose by 98%, to close at $721.60 million (2018: $364.38 million). Mananagement noted, “the fee revenues were principally driven by continued growth in the asset management business line and the effects of the introduction of the investment banking business line. The investment banking business, launched in December 2018, has generated fee income of $331.3 million up to June 2019.”

Notably, the Company reported other income of $312.19 million for the period relative to $871,000 in 2018. Management noted, “this principally resulted from the recovery of investment losses incurred by the company earlier in the year.” As such, net operating revenue amounted to $2.82 billion relative to $841.73 million recorded for the comparable period in 2018. Management highlighted, “the most significant drivers of this growth were the gains in investment activities of $1.1 billion, and fee income. Non-interest income as a percentage of net revenue, rose to 84.5% from 63.5% in the previous year which is consistent with our strategic objective of growing this revenue segment towards commanding a greater share of net revenues.” Net operating revenue for the third quarter amounted to $1.65 billion in contrast to $351.63 million booked for the third quarter of 2018.

Administrative Expenses for the period amounted to $345.81 million, increasing 28% from $270.40 million in 2018. Staff costs for the period rose 48% from $271.12 million booked in 2018 to $402.27 million. BIL reported an “Impairment/ Expected Credit Loss (ECL)” of $80.73 million (2018: nil) for the nine-month period. Total expenses for the period rose 53% to close at $828.81 million compared to $541.53 million recorded in 2018. BIL noted, “the increase was largely driven by strategic growth objectives, specifically an additional #131.1 million increase in staff costs driven by talent acquisition in support of revenue growth and diversification efforts, which were more than offset by the resulting gain; and a related rise in administrative costs associated with increased marketing efforts and facility improvements.” As, such, profit before tax amounted to $1.99 billion relative to a profit before taxation of $300.20 million in 2018. 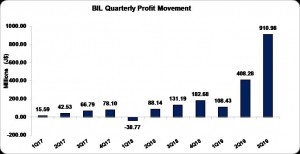