For the week leading up to the Christmas holidays (14 to 18 December 2020), Bank of Jamaica (BOJ) net issued currency amounting to $5.7 billion, representing an increase of 3.3 per cent in the currency stock for the week. This was below the $8.1 billion or 6.2 per cent increase in the stock for the similar period in 2019. 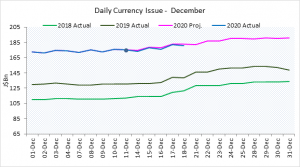 As at 18 December 2020, the stock of currency was $180.7 billion, representing an annual nominal growth of 30.4 per cent, relative to 13.9 per cent at the corresponding period in 2019. When the forecasted change in the general level of consumer prices is considered, the estimated real growth in currency for the period is 23.7 per cent, which is above the real growth of 7.2 per cent for the same period of the previous year.

On 14 December 2020, the BOJ issued a press release indicating that the currency stock is projected to increase in December 2020, relative to the stock at end-November 2020, by $22.0 billion (13.0 per cent) to $190.9 billion. There is some uncertainty surrounding this forecast particularly due to the COVID-19 pandemic.

Typically, Bank of Jamaica (BOJ) issues and redeems notes and coins daily in order to meet the demand for cash from individuals and businesses.1 There is normally a stronger demand for currency during the month of December, associated with increased spending over the holiday period. Financial institutions therefore request more currency from BOJ to satisfy this demand.

· Real Currency Growth: reflects the percentage change in the real stock of currency which is calculated as the nominal currency stock divided by the consumer price index (CPI) at a given point in time.