The Monetary Policy Committee, at its meeting held on 28 and 29 June 2021, judged that the existing stance of monetary policy remained appropriate to support inflation within the target range over the next two years. The MPC unanimously voted to maintain the policy rate at 0.50 per cent per annum based on the following considerations:

Inflation was projected to average 4.8 per cent over the next two years. The inflation forecast anticipated that commodity price inflation would accelerate in the context of global supply chain disruptions and increasing demand as economies reopen, leading to higher domestic transport and processed food inflation.  In addition, inflation was expected to be tempered by subdued domestic agricultural food price inflation, based on expectations of favourable weather conditions. A normalisation in domestic GDP growth and some imported inflation were projected to support moderately higher core inflation over the forecast period. 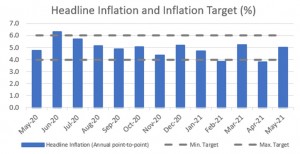 There is a high level of uncertainty surrounding the inflation forecast especially in the context of the emergence of new variants of the Coronavirus. Inflation over the next year could be higher than had been projected. Inflation in the short-term could rise to, or above, the upper limit of the Bank’s target range but this should not persist beyond a year. The principal upside risk to inflation stems from higher than anticipated oil and grains prices. However, while international commodity prices are currently above projections, the prices for several commodities, including grains, have started to fall.  Upside risks to inflation arise from further increases in regulated prices and from higher than anticipated growth in the economy while on the downside, there are indications that strong agricultural production will support even lower food price inflation in the short term.

An assessment of the risks to the GDP growth forecast suggests that GDP is still likely to fall within the range of 5.0 per cent to 8.0 per cent for FY2021/22 but the outlook is now closer to the upper end of the forecast range. Economic activity is expected to improve over the near term, relative to the previous forecast, due to the impact of stronger than expected improvements in the economies of Jamaica’s major trading partners. In this context, high frequency data suggest that growth in the services industry (particularly tourism) has been stronger than previously anticipated. In addition, there are indications that private investments will be higher than earlier anticipated. However, other high frequency data point to weaker than anticipated performance of selected sectors such as Mining. GDP growth could also be weaker than forecasted if there is a third wave of virus infections both locally and in Jamaica’s major trading partners that results in a tightening of restrictions.

GDP growth in the United States is likely to be higher than projected as vaccines are distributed at a faster pace than earlier anticipated, restrictions on activities ease and pent-up demand is released. Further, additional fiscal stimulus will support higher growth. These developments, among others, could temporarily push oil and grains prices higher than earlier projected.

The domestic fiscal policy stance continues to pose no risk to inflation over the near term.

The MPC will continue to closely monitor the economic environment and will take whatever action is necessary to achieve its objective. The Committee intends to maintain this accommodative policy stance, which is supportive of economic recovery, provided that there are no sustained threats to inflation breaching the upper bound of the Bank’s inflation target.